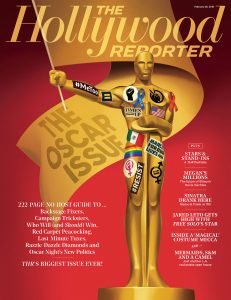 Today, The Hollywood Reporter published its latest issue titled “The Oscars Issue.”  Its bold red cover features the Oscar award bestickered with political movements of the day. But to the side of the trophy, at the top of the column, is mention of an article inside titled “Stars & Stand-Ins: A THR Portfolio.”

Stand-In Central editor Ben Hauck and senior contributor Sara DeRosa were interviewed for the articles. Even more, Sara was photographed, alongside her longtime first-teamer Téa Leoni. Sara and Leoni have worked together for numerous seasons of the television series Madam Secretary.

In one article, Sara speaks of her experience standing in for the series’ lead actor, and Leoni shares her experiences meeting and working with Sara. Leoni speaks of her “instant connection and mutual respect” for Sara, and also treasures the additional time she gets to spend with Sara as Sara drills her on her lines in their daily commute to set. “Those car rides are my favorite,” says Leoni.  Sara and Leoni have among the more exceptional relationships between first- and second-teamers, with Leoni saying she is “dependent on Sara more than anybody else.” Congratulations on the profile and recognition, Sara!

Ben’s first major stand-in job (the one that led to the inspiration for this very website, Stand-In Central) was recalled in the other article. In 2009, Ben stood in for Jason Bateman on his film The Switch, and he subsequently stood in for Bateman on a few other productions.

The second THR article makes mention of “the treatment (or periodic mistreatment)” of stand-ins, as well as SAG-AFTRA’s code of conduct. However, that SAG-AFTRA code of conduct is largely targeted at sexual harassment, not more generally physical harassment such as being grabbed, touched, and moved non-sexually without the stand-in’s consent.

Furthermore, the SAG-AFTRA code of conduct is more of an instrument to use on SAG-AFTRA members, less of an instrument to use on non-members who might work in other departments on a film or television set. It is nice to see THR continuing to publish the issue of physical harassment of stand-ins, though SAG-AFTRA’s response to stand-in harassment has been measurably absent in some respects.

On that note, Rebecca “Reb” Bujko, a stand-in for Amy Adams, was also interviewed for the second article. Reb was put in the spotlight when Adams, who was mistaken for Reb on set, was “grabbed” by another crew member, a behavior to which Adams took serious offense and which brought to light how stand-ins can be mistreated on set. The story was profiled in an earlier article on Stand-In Central as well as THR.

On the more positive side, Reb speaks of the value of working as a stand-in, noting what insights the work provides to her as an actor. She says, “You can learn how to act in an acting class, but you don’t necessarily learn how to be an actress there. [On set is] where you learn about delivering dialogue, hitting your mark or even wearing an uncomfortable microphone under your clothes.”

What did you learn about stand-in work from the spotlight The Hollywood Reporter shined on the job? Share what you learned in the comments section below!