To be a good stand-in, it helps to be aware of these responsibilities and develop abilities in order to fulfill them.  In particular, you need to pay very close attention and be very attentive. Ultimately, you are there to help the rest of the crew. When you can perform what is expected of you as a stand-in, production can run smoothly and swiftly.

For a complete overview of the job of the stand-in and callsheet terminology,
download The Stand-In Handbook and The Callsheet Cheatsheet. 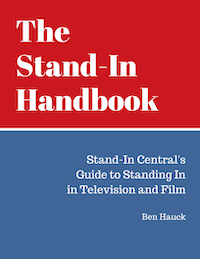 Click here to learn more about The Stand-In Handbook.

Click here to learn more about The Callsheet Cheatsheet.