Bringing Your Own Portable TV to Set

When you are standing in, often you are responsible for keeping track of blocking changes your principal actor makes.  However, stand-ins don’t usually have privileged places at the monitors.  Their view of the monitors may be blocked by the director and script supervisor who usually sit closest, and there may be other crew members huddled behind them trying to catch a glimpse of the monitor.  Your view may be completely obscured.

Last year I saw that some members of the hair department for a production I was standing in on had brought their own portable televisions to set.  I also saw that they quickly found they couldn’t use them.  I asked a little more about their  TVs, and they shared.

Apparently, the production we were on wasn’t broadcasting a signal, and if it had, the portable TVs would have been able to pick up the signal.  These crew members would essentially have their own monitors from which to watch the action without having to fight to see on the director’s monitors.  I also learned that the portable TVs were relatively cheap and available for purchase from Target or even a local drug store. 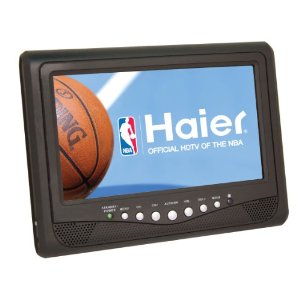 As a stand-in, I saw value in having one of these portable TVs for my own work.  Eventually I bought one.  The crew members had had a Haier brand of portable TV, and I found on Amazon.com for around $50 the Haier HLT71 handheld LCD TV.  With a 7″ screen, this portable TV is fully rechargeable and comes with a power cable and remote control.

Last week I was able to try out the TV while working on a set that was broadcasting its signal.  As of publication, I’m still getting the hang of the device, but having it is definitely an advantage when standing in.

When you turn on the TV, first you probably will need to scan for signals.  This takes a few minutes and will feel rather slow, though you may be able to get it done between being dismissed from set and the announcement that production is rolling.  When the scan is complete, the TV screen lights up with the first channel it picks up–perhaps a local station.  If you jog channels, you may eventually come to the channel on which is broadcast the video for your shoot.  For my recent gig, production was broadcasting A Camera on Channel 27.  (If there is a B Camera, it may be broadcasting on a second channel.)

Questions about Using a Portable TV

I still have a number of questions about the device and how it works, but generally it was a very helpful tool.  First, I’m unsure how charged I brought this TV to set.  On a 14-hour shoot day, the TV lost power after about half a day of intermittent use, and I didn’t bring the power cable to power it.  Nor did I bring the remote control to test going directly to the broadcasting channel.  You have to jog channels with the buttons on the face of the TV if you don’t use a remote, and when I would scan for signals, sometimes the broadcasting channel wouldn’t register, meaning the buttons would skip the broadcasting channel and I’d have to do another scan.  Bringing the power cable and the remote next time would be good for further testing.

If you decide to get one of these devices, I have a little advice.

First, personalize yours.  There may be a number of crew with the same portable TV, and yours may be easily mixed up with another’s if it isn’t personalized (plus, someone might think it’s not yours since it’s currently unusual for stand-ins to own such equipment).

Second, get some kind of tote for your portable TV so that you can carry it on your person when you are on set and so you can also store its accessories.

Third, always keep its volume at zero.  This will ensure when you turn it on that no sound will come out of the device from another channel, which could spoil a take if audio comes out while rolling.

As I learn more about how to use this portable TV as a stand-in, I’ll post updates to this blog post.  But for now, this device seems like a pretty cool addition to the stand-in’s toolkit.

Have you used a portable TV as a stand-in?  Are there other models of portable TVs you recommend?  If so, post below!