Several months ago, Mark Naftal was up for a big stand-in gig for the actor Ben Stiller. He ended up on Stand-In Central and read an interview with another stand-in for Ben Stiller, Rob Tode. Mark eventually landed the gig, and after a great experience, I asked if he’d like to do an interview about what the experience was like as a first-time stand-in. What follows is his interview!

MN: My name is Mark Naftal. I live in Atlanta, Georgia, and am a 49-year-old married father of two. In the past year I have done stand-in and background for five TV shows and three feature films, the most recent being Ben Stiller’s full-time stand-in on Neighborhood Watch.

SIC: For what other actors have you stood in?

MN: I’ve only stood in for Ben Stiller, but the shoot was 62 days and I was on set as a stand-in for 57 of those days! I wanted to do stand-in as soon as I got started doing extra and background. I was waiting for the right opportunity to showcase my maturity, reliability, and skills. As it turns out, I got all I could handle with this assignment.

SIC: How did you prepare yourself for the big job?

MN: The casting people at CL Casting contacted me late August to check my interest and availability for a commitment that would run for four months. I had to agree to cut and color my hair and shave my facial hair if need be.

I was up for the role against five other people. I interviewed with the AD, 2nd AD, director of photography, and executive producer. They eliminated three candidates at that interview. The remaining candidates were invited to a screen test and costume fitting. After a full day of being run in and out of set, in front of a green screen and wearing different costumes, I was selected.

I prepared for the schedule by staying in real good physical condition, eating properly, getting good sleep, and avoiding alcohol! Fortunately I have an amazingly supportive and encouraging wife, who is responsible for my getting into this business in the first place! Because of her amazing support, I was able to commit to the schedule and feel okay about not being around the house, her, and my son for such a long time.

SIC: Kudos to her! What were some of the things you had to get used to when standing in?

MN: The timing of standing in is polar opposite than that of doing extra or background work. You work when the crew works setting up the scenes, while the actors, extra, and BG relax or stay in holding. I had to learn the timing and cues of when I would be called to set, observe and learn blocking/marking rehearsals, and learn the general flow of actions by camera, lighting, and set dressing while I did my work.

SIC: Did you make any mistakes?

MN: Of course! Watching the monitors when the scene I had set up was being shot was something I would tend to not remember. After having worked for up to an hour straight, on my feet, outside in the cold, overnight … as soon as I was excused from set, I’d use the restroom or grab a snack. Sometimes by not watching the monitors I’d miss a change in the scene … I learned real fast not to make that mistake.

The other thing that sticks out is Ben is a lefty and I am right-handed. I had to think and act lefty. Opening doors, handling a gun, etc.

SIC: Wow, I never thought about that! What were you really good at? 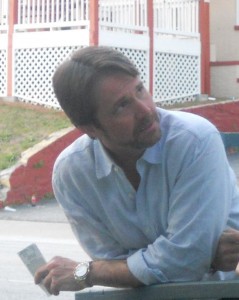 MN: Other than the fact I am a double for Ben physically, the ADs and producers were intent on having a professional and mature stand-in for Ben. They explained to me he is businesslike and focused on set, and his stand-in needs to be the same. He does not like his mark “warm”–meaning I needed to be off before he got to set.

I dovetailed into the rhythm of Ben and the crew by being preemptive in my understanding of when I needed to conclude and exit set, many times prompting the AD and camera crews as Ben approached. I also gravitated towards taking some responsibility for the other stand-ins, many of whom were much younger than me. I sort of became the unofficial stand-in “dad.”

SIC: Did you also photo-double for Ben?

MN: I actually did not photo-double. His stunt actor Greg Fitzpatrick did all of the photo-double work.

SIC: Atlanta is a growing market for film. How does a person interested in standing in in Atlanta land a stand-in job?

MN: The market in Atlanta is huge and growing. I heard there are 81 feature films and TV shows filming here this year.

From the first time I was on set I wanted to stand-in. I think you need to have a decent amount of set experience before you consider submitting for stand-in. I think the other elements needed are having a reputation for reliability, professionalism, and the ability to take direction. Once you have set experience and establish your reputation, you are ready to submit for stand-in, or be seriously considered for it–assuming, of course, you match the actor’s physical dimensions.

SIC: What is the deal with union versus non-union status in the film industry in Atlanta?

MN: Georgia is a right-to-work state: non-union. I am not 100% versed in the nuances of how that affects the film industry, but I understand that on top of the generous tax credits being offered by the state, local personnel hired for production are much less costly to employ than that of union.

SIC: Right. So, looking back on your first stand-in experience, how has the experience affected you?

MN: I received a first-class education on the production of a big-budget film, at least the principal photography portion. I felt so incredibly important to the production and was so proud to go to work and be a part of it. I have taken all of this as it comes–extra, BG and stand-in–but having ended my first year in the business by completing this film is more than I ever visualized. The very first extra appearance I had was not even a year ago. My confidence and enthusiasm is very high as a result of being Ben Stiller’s stand-in.

SIC: Was it very different than what you expected?

MN: I did not know what to expect. I knew it would be long, hard hours … but it was longer and harder than I had imagined! I had no idea the amount of raw effort and investment exists in the production of a film start to finish, all of the people required.

SIC: How do you expect to use your stand-in experience in your future in the industry?

MN: Naturally I want to do more and make it to the next step. In fact, I have already begun the next series of acting lessons following upon where I left a year ago. The on-set experience, flow of production, learning of crew responsibilities, and similar things will be the key experiences I take forward, which I feel will give me a better chance at success.

MN: I have a lot of notable memories of this experience, but one really sticks out. There was a scene we had been shooting, a six-day effort for one long scene. First thing one morning, Ben gave his okay for me to read his lines off-camera in a scene with Jonah Hill and Vince Vaughn.

I was so nervous but I did calm down … So, in the movie there will be an eight-line exchange between Jonah, Vince, and Ben where I was the focus of Jonah and Vince’s eyelines and dialogue. I will never forget it!

SIC: That sounds like a trip! Thanks a lot, Mark!

Mark Naftal lives with his family in Atlanta, Georgia.