This tip comes from Christina George, who recently stood in for lead actors in Gods Behaving Badly and The Longest Week.

According to Christina, from time to time she is asked to stand in for men.  Of course, men sometimes have facial hair, and for the sake of lighting, she’s needed to meet the demands of such a stand-in job.

“I don’t have a beard, and have never grown one, so sometimes I have to resort to desperate measures,” says Christina.

Her first time standing in for a man with a mustache was a circuitous nightmare.  “I was going back and forth between the makeup trailer and the props truck trying to find facial hair.  Production didn’t want to pay for spirit gum, which is a bump,” explains Christina, “so I put black marker on the outside of my index finger in the shape of a mustache and held my finger up to my lip when they were lighting me.”

But it wasn’t until her third time standing in for a man–a man with a long fu manchu–that Christina figured out her calling.  The term “utility hair” was coined by Christina when production found her hair an asset in production.  “Christina’s hair has a unique character.  It’s beautiful and flowing, with rich color.  But it’s also masculine and heroic, which can transform to deliver whenever the demands of production need it.  I would work with no other head of hair,” said DP Alan Smithee, who has worked with her on several productions since.

Here is a photo of Christina George’s “utility hair” in action. 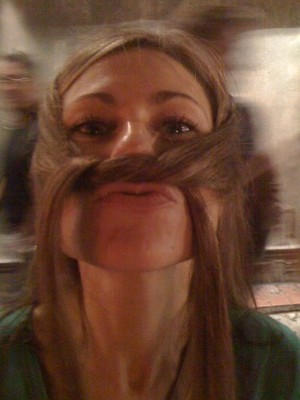 Do you have interesting ways you’ve used your hair as a stand-in?  If so, share below!