Stand-Ins at the U.S. Presidential Inauguration

In an October 2012 post in Stand-In Central’s Tips & Tricks Blog, we told you about three Lynn University students who stood in for U.S. presidential candidate Mitt Romney, presidential incumbent Barack Obama, and moderator Bob Schieffer for the final debate before the 2012 presidential election.

Rather than the more public debate stand-ins who helped each candidate hone his debate performance, these stand-ins were used in pre-production for the televised debate. They spoke of their experience standing in for the debate in this Google Hangout soon after their experience: 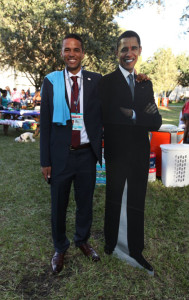 Eric Gooden (left), next to a cutout of Barack Obama, (from the Lynn University website)

To update the story, the stand-in for Barack Obama, Lynn senior Eric Gooden (who does a fantastic Obama impersonation in the above video), has been able to extend his luck with an upcoming trip to the presidential inauguration on January 21, 2013, to see his former first-teamer’s big day along with his classmates in associate professor Sidnee Kerker’s course  “Witness to History: The 2013 Presidential Inauguration in Washington, D.C.”

Elliott explained that he was chosen as Obama’s inauguration stand-in given the similarity of his physique with the President’s, with Elliot being an inch taller than the 6’1″ Commander-in-Chief. Washko, Ms. Biden’s stand-in, noted that as a stand-in, she was merely playing one supportive role among several others in the important event.

Have you stood in on a historic production or event?  If so, share below!