Sarah Jones and Safety Concerns as a Stand-In 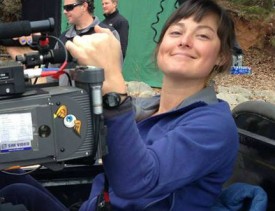 Recent news has shed light on the tragic death of Sarah Jones, a camera assistant on the film Midnight Rider who was killed when a train struck equipment on the tracks where she was shooting. The controversial accident injured several other crew members.

Aside from local, state, and federal investigations into the accident, the story has sparked both a movement to memorialize Sarah Jones with the Slates for Sarah project as well as discussions about safety on set. If you work on a television set, you may see her name on the slate, not only to remember her but also to serve as a reminder to work safely.

When you are working as a stand-in, you can sometimes fall through the cracks. Keeping that in mind, it is important to be assertive about your own safety when you are standing in.

If you do not feel that you are safe or that you cannot perform something safely when you are standing in, you should not do it until it can be performed safely.

In general, ADs will be responsible for the safety of the crew on set. However, if you are working on a dangerous set and you are in a shot that is at a distance from the camera, it is possible you could be overlooked as the crew addresses local dangers.

For example, recently I was standing in at an airport near an active runway. A working helicopter was positioned at a short distance behind me, and military vehicles were set to drive between the helicopter and my position. It was windy, loud, and getting dark, and as crew members worked quickly, it seemed as if I was forgotten, standing alone on the open tarmac. Ear protection was being passed out to the crew, but because it was loud and I was some distance away from the camera, no one could hear me yelling to have some ear protection. I was fearing the sound of the helicopter, which we were told would be extraordinarily loud.

When You Feel Unsafe

Keep the story of Sarah Jones in mind when you find yourself in an unsafe situation. Safety concerns are real. Take care of your own safety when it seems that crew is not addressing it. Assert yourself, protect yourself, and leave set if the situation is too dangerous.

How do you handle safety issues when you are standing in? Share your stories below.