Interview with Mark McNamara, Stand-In for Chewbacca — Article from FOXSports.com

With the seventh film in the Star Wars franchise being recently released in movie theaters, it may come as no surprise that stand-ins from the franchise also get publicized. 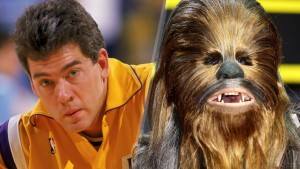 Such is the case for former basketball player Mark McNamara, an eight-year veteran of the NBA. On December 17, 2015, FOXSports.com ran an interview with Mark on his experience prior to the NBA working as a stand-in for the character Chewbacca on the 1983 film, Star Wars: Return of the Jedi.

Chewbacca was played in the film by actor Peter Mayhew, reportedly standing at 7’3″. Mark, who was at or close to 7′, got the job after his cousin Chris Bowers, who was standing in for Carrie Fisher as Princess Leia, recommended Mark for the job. The production had been seeking an athletic person comfortable with camera work to stand in for Mayhew, who had a distinctive walk and wore a hot full-body costume.

Mark ended up with priceless memories from his stint working on the film in 1982 — but he didn’t end up with the famous Wookiee’s mask. As he explains in the interview, he was far too tired to retrieve one after someone in the props department offered him one.

The Internet Movie Database credits neither Mark nor his cousin Chris as stand-ins on the film. But the IMDb does credit Mark for his subsequent stunt work on the made for television movie, Ewoks: The Battle of Endor. In fact, a 1988 Los Angeles Times article about Mark’s Chewbacca stand-in work on Return of the Jedi suggests he was a stunt double for Peter Mayhew, not just a stand-in. (A stunt double performs a stunt on camera for an actor; a stand-in does not work on camera but instead works behind the scenes.)

Meet the former NBA journeyman who was a stand-in for Chewbacca — article from FOXSports.com

Have you stood in for an iconic character? We want to know! If so, post below!