An anonymous stand-in passed along this challenging arrangement of marks for her actor in a scene. It included some added “color commentary.” 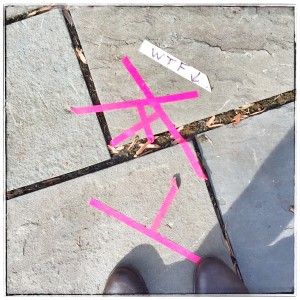 This is a shot taken by an anonymous stand-in of the floor after a recent marking rehearsal. The marks denote three positions her actor had in one scene. The added comment “WTF↓” expresses shock about the confusing marks for her actor.

To remedy such problems, after laying marks camera assistants will sometimes add numbers to clarify the sequences of positions the actor took in the scene. So, in the middle of the T, the camera assistant may write “1,” “2,” or “3” to make it clearer which is the first mark, second mark, and third mark.

Actor Jonny Lee Miller encountered the marks on the set of Elementary and was amused enough to take his own photo of the marks, which he posted on Instagram.