On many sets, it is often easy to figure out which are the actors and which are the stand-ins. Stand-ins are the ones who wear a piece of tape on themselves that identifies their name, the name of their actor’s character, and the number for the actor as listed on the callsheet.

That’s why this ad stood out! 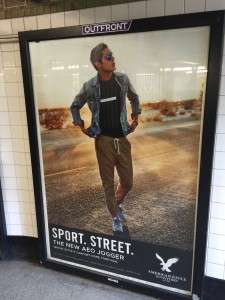 On July 15, 2016, as I was headed to a stand-in job in Long Island City , I saw this ad posted in the Hunter’s Point subway station.

It’s an advertisement for American Eagle Outfitters jogger pants. But that’s not what caught my attention.  It was the white stripe on the model’s top, which resembled a piece of white tape sloppily applied.

Stand-ins often wear tape on their clothes. On the tape is written their name, the name of the character for whom they are standing in, and maybe the number of the actor as written on the callsheet. Arguably this is so that crew can quickly identify stand-ins from a crowd or call them by their names, but it is also a protocol that some stand-ins find demeaning or insulting.

Seeing this tape on the model made me think that it wasn’t the original model hired for the shoot who was pictured in the ad, but rather the model’s stand-in!

But the ad made me do a doubletake — and led me to share it with the Stand-In Central audience because of the smile it accidentally put on my face.