Robots are threatening to a number of people — because robots threaten their jobs. If a robot can do the job, that may mean a person may be out of a job.

That’s why the caption “Robot Stand-Ins” that appeared on the news recently spooked us!

Take a look at this funny photo of a robot “threatening” the jobs of stand-ins. 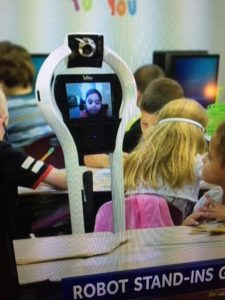 On Sunday, November 13, 2016, I was watching the NBC Nightly News when I saw a caption that grabbed my attention.  The story was about a robotic teleconferencing device called VGo, which helps people in remote locations to have an actual presence in another environment.

The story focused on the use of VGo by a young Florida girl named Abby Newbury. Attending school had become unsafe for her because of severe allergies, so by teleconferencing with VGo, she could virtually attend class, move around the school space, and interact with teachers and students while she logged in to the robot from home. See the story below:

The caption on the story was “Robot Stand-Ins Get Kids Back into the Classroom.” I grabbed my camera and hoped to capture a frame of the story including the phrase “Robot Stand-In” in the shot with Abby in her robotic form. Bingo! The result is above.

It’s questionable whether robots could do the job of the TV/film stand-in.

Stand-ins are often hired for their height and coloring, and while those features could be represented by a posable mannequin or dummy, stand-ins often have to move and perform the actions of an actor in a rehearsal — which a mannequin cannot do.

A robotic or animatronic mannequin might be able to perform actions, but so far today the cost of a robotic or animatronic mannequin would be cost prohibitive for a production — not to mention probably not as dynamic as a professional stand-in would be. A stand-in in the flesh would be able to respond to verbal commands with less issue than a robot — at least in most cases.

A VGo costs around $6,000, and while that may seem less expensive than a long-term stand-in, a VGo robot does not quite have the physical features a stand-in does.

This is to say an excellent, professional TV or film stand-in would probably exceed the capacities of a robotic version of the stand-in.

So for at least the near future, human stand-ins have little to fear from robots.

See other photos from our Stand-In Central Photo Series »