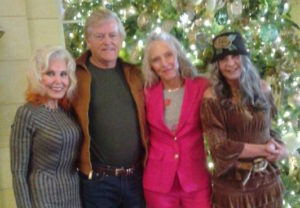 The Netflix film Our Souls at Night stars Robert Redford and Jane Fonda. Due out in late spring 2017, the movie shot in the fall of 2016 on location in Colorado. The stand-ins for the film recently sat down for an interview with the Colorado Springs newspaper, The Gazette.

From the likes of their stories, shooting this film was an eye-opening and magical experience for the stand-ins. “Wonderland” was the word Nancy used to describe it.

But despite the wonder of it all, not unlike many other stand-in jobs, this one demanded twelve- to fifteen-hour days from the stand-ins over a two-month period.

The shoot also wasn’t without its share of drama. Because of her past political activity, Fonda was an unwelcome presence for some people in the town. Protest signs were posted telling Fonda to leave, and she was reportedly the target of death threats. This meant guards were on set, presumably to protect the controversial actor. However, as her stand-in Nancy points out, this did not subtract from her own positive experience working on the project.

The article goes into how the stand-ins were cast — from casting calls at first, and later with actor approval. It also details a few headscratchers. For example, apparently a casting director asked the age of one of the stand-ins around the time of hire, a question that might be seen as illegal to ask in light of Colorado’s age discrimination laws. Also, in the video portion of the article, the stand-ins say they “played stand-ins,” when more accurately they “were” stand-ins. If they were on screen portraying stand-ins, then technically they’d be “playing” stand-ins!

All in all, you get the sense from the interview that the stand-ins on Our Souls at Night gained a really remarkable experience along with a lot of funny stories.

Click below to read the entire story and see the accompanying video and photos:

‘Our Souls at Night’ movie stand-ins, doubles reminisce about time on set – from The Gazette

Did you stand in on Our Souls at Night? What was your experience? Share your anecdotes below!