An Award for Stand-Ins: The Elmer Awards

There are the Oscars, the Emmys, the Golden Globes, the SAG Awards … Actors can be recognized for outstanding achievement in numerous ways for their work. The same with crew members.

But which personnel working on film and television who straddle the category of actor and crew do not receive recognition for outstanding achievements? You guessed it: Stand-ins.

Before you laugh, there was actually a time when stand-ins did get recognized for their outstanding achievement. The Elmer Awards were given way back when to honor the work of stand-ins.  Here’s a little history of the Elmer Awards, perhaps the only award to date for stand-ins.

History of the Elmer Awards

According to the book Hollywood Unknowns: A History of Extras, Bit-Players, and Stand-Ins, organizational activity among stand-ins started to take shape in the late 1930s and early 1940s. A small collection of second-teamers in December 1939 incorporated as “Hollywood Standin Players, Inc.” That same group eventually changed its name to “The Hollywood Stand-Ins Guild.” In the 1940s, a different organization of stand-ins emerged: the Associated Stand-Ins of Hollywood. 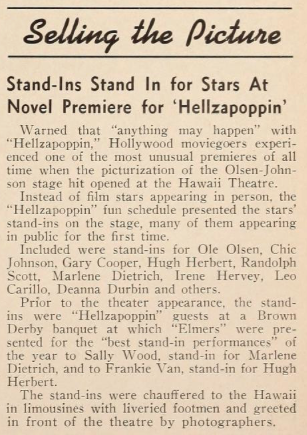 Article about the Elmer Awards from Showmen’s Trade Review (36:8)

Based on the article, it almost reads as if the Elmer Awards were not sponsored at this time by the Associated Stand-Ins of Hollywood but rather were part of a publicity stunt for the film Hellzapoppin’ — an observation supported by a movie poster for the premiere promoting the stand-ins’ attendance.

The Elmer Awards ceremony immediately preceded the film‘s premiere screening, wherein the stand-ins appeared and were photographed in costume as their respective actors. The preceding awards ceremony sounded as if it was sponsored by the film. Winners of “best stand-in performance” decidedly went to two stand-ins who worked on the film rather than other stand-ins in the industry: Sally Wood (who stood in for Marlene Dietrich) and Frankie Van (who stood in for Hugh Herbert).

That said, the Elmer Awards appeared to have evolved into something more legitimate by 1944. Variety reported on the March 1944 event, officially sponsored by the Associated Stand-Ins of Hollywood. Here’s the article: 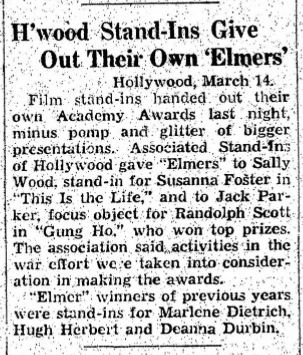 Article about the Elmer Awards from Variety (154:1)

Based on the article, it seems more than standing in figured into the awarding of the Elmers. “[A]ctivities in the war effort” seems to have had an influence on who received an Elmer that year.

While perhaps more legitimate than the 1942 Elmers, it is interesting to note that Sally Wood won again, this time for her stand-in work for Susanna Foster in This Is the Life. Jack Parker also won for his work standing in for Randolph Scott in “Gung Ho!”: The Story of Carlson’s Makin Island Raiders. Interestingly, he is referred to as a “focus object” in the article, which presumably alluded to his being the “object” used for “focusing” the camera in place of his respective first-teamer.

Given that the stand-in for Deanna Durbin won in the past, this reference presumes there were Elmers awarded between the first ceremony in 1942 and the 1944 ceremony. But there is no yet-discovered coverage of Elmer Awards after 1944.

The source of the name for the stand-in award is unknown. The L.A. Daily Mirror speculates that the name for the awards — “Elmer” — may be from the 1939-1940 New York World’s Fair’s publicity department.  The NYWF had a “common man” mascot named “Elmer.” The Daily Mirror notes that an issue of the 1940 Motion Picture Herald adds some sense of the meaning of the name “Elmer” at the time, saying this: 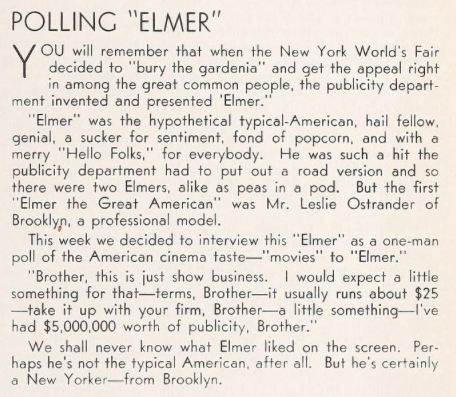 Article from the Motion Picture Herald (139:13)

In fact — and this may be coincidental — Leslie Ostrander (who played the NYWF mascot “Elmer”) was photographed with a dancer from Hellzapoppin’ around the time of the first Elmer Awards. Helene Ecklund (also known as Helen Ecklund and Kerttu Helena Eklund, or “Eckie” for short) was a Broadway dancer in the stage version of the eventual film around 1940, though she does not seem to have been in the film. The photo was likely made at some time between 1939 and 1940, or about two years before when the first Elmers were awarded. Perhaps “Elmer” is meant to signify something more pedestrian and common relative to the Oscars.

Or perhaps the name “Elmers” is an inside joke? There were two actors who several times received credits on films as “Oscar and Elmer.” Ed Platt and Lou Fulton were credited as “Oscar and Elmer” on 1936’s The Old Corral, 1937’s Gunsmoke Ranch, and 1938’s The Painted Stallion, and also appeared together in 1937’s Dick Tracy. In fact, Ed played characters named Oscar on a number of films, and Lou played characters named Elmer on a number of films, too. According to the book From Radio to the Big Screen: Hollywood Films Featuring Broadcast Personalities and Programs , the duo were “rustic novelty singers,” potentially with rural vaudevillian origins as noted on a message board post about them. If Oscar and Elmer were known to the namers of the Elmer Awards, “Elmer” made a nice-sounding counterpart to the notable “Oscar” award.

Should Stand-Ins Get Award Recognition?

Sometimes jocularly stand-ins will say that stand-ins should be awarded for their work. Given that it is behind the scenes without any manifestation in a production, it is hard to measure “outstanding achievement” for a stand-in.

But given the past existence of stand-in awards, the idea is not necessarily so silly. Some stand-ins take their jobs very seriously and to date receive no formal recognition for their work. That said, many other cast and crew members go unrecognized for their herculean work, so stand-ins are not the only ones in the dark.

All in all, it was such a funny tidbit to find out that there were stand-in awards — the idea was not so farfetched, and that it actually existed, along with having a special name.

Definitely pick up or download a copy of Hollywood Unknowns. It gives fascinating insight into the world of stand-ins of the past!

Were you witness to an Elmer Awards ceremony? Do you have inside information about the Elmer Awards? How would you measure “outstanding achievement” for stand-ins? Post your insights below!