This post is part of Stand-In Central’s deep-dive series into the coronavirus pandemic as it relates to stand-in work in TV and film. For more posts in the long-running series, visit https://standincentral.com/coronavirus.

Amid the coronavirus pandemic, stand-in work is starting to return in the New York City area. There has been much discussion about the changes stand-ins will see on set and how those changes may affect their work.

Some sets may move away from providing paper sides for sanitary reasons. Without paper sides, stand-ins either will not have access to sides, or will have access to digital versions of sides that they can access from their smartphones.

While that might be a good thing on the whole, moving to digital sides or otherwise getting rid of paper sides may be problematic for stand-ins, especially those who take notes on paper sides about the blocking in the scene. (“Blocking” refers to the different places where actors sit and stand in a scene.)

So, Stand-In Central sought out to find some ideas to address the move away from paper sides and how stand-ins might keep track of blocking. In general, we try to travel light to work, and any gear we carry, we need close to our bodies and out of sight of the camera.

We first started looking at Boogie Boards for their drawing and erasing ease (Stand-In Central’s editor has an earlier version and loves it!), but the problem with a Boogie Board is that it is one more thing to carry. Around the size of a paperback book but rigid, it isn’t exactly easy to stow in a fanny pack.

So, we realized a virtual version of a Boogie Board might be a good solution, so naturally we looked for apps that might do the trick. We gravitated to drawing apps, and when comparing a few, we arrived at a clear winner for what utility it could offer a stand-in looking to write down blocking…

We arrived at the free app called Joy Doodle. It is available for the iPhone.

Joy Doodle is a drawing app that you can use with your finger or with a stylus. Its defaults provide for a blank black screen as well as the ability to draw in a different color each time you draw a line. This ability not only makes for visually striking drawings, but also some means for distinguishing drawn lines a little better than if they were single colors.

In addition to playback, Joy Doodle lets you save your drawing as a video, as well as adjust the speed of playback (up to 6x speed) as well as rotate the video (in increments of 90 degrees).

Joy Doodle is a free app that is supported with ads. You actually might not encounter ads in using it, but for only $0.99 you can use the app ad-free.

In the scene, which is in a living room with a couch, a coffee table, a front door, and a staircase (among other features), Grace is sitting at the far end of the living room couch, when Ben enters the living room from the front door. He stops halfway between the door and the couch to talk to Grace, then he moves a step in as he talks. Grace stands, then moves close to talk to Ben. They have a few words, when Ben paces to his left a step. Grace followed Ben, and again moves in to talk closely with him. Then, Grace moves to her right to leave the living room but stops before exiting. Ben does a counterclockwise turn to mount the staircase and he stops midway up the stairs to say something else to Grace. Grace moves a step toward Ben to say one more thing, then exits. Ben then continues up the stairs, and the scene ends.

That scene’s blocking is represented in the following video exported from Joy Doodle, that starts with a layout of the couch, the circular coffee table, the staircase, etc.:

This is the default playback speed of 1x. While is it not the speed in which this blocking was jotted down, it does show the sequence the jots were jotted down.  As a result, you can see that Ben made several moves before Grace moved, in case there was any confusion about who moved when.

Now, if that 29-second video is too long, the following video exported from Joy Doodle is four times faster:

At 4x playback speed, this playback quickly cuts to the chase with respect to the blocking of the scene, and in 7 seconds it clarifies what the blocking is in the scene and quickly shows the sequence.

But let’s say you wanted to change the orientation so that it was a bit more from the perspective of Grace. Joy Doodle permits rotating the video before exporting, as seen here:

As a result, the stand-in who might be watching Grace might have a better appreciation of the video than if watching the other video that was turned in the original way.

Aside from simply video, Joy Doodle can be helpful for simply saving blocking in a scene as images.

And because there are no limits to what you can draw, you could draw every rehearsal you see and save them in your phone for later viewing — which may be helpful if you have to come back to a scene days later to shoot, either as a photo double or because of a pandemic-related production delay. 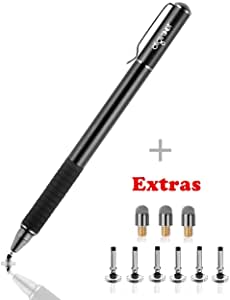 While you can use a finger to draw using Joy Doodle, you will have a bit more precision if you use a stylus.

For portability, it may be helpful to get a stylus that is durable and will stay easily in one’s pocket.  One with a clip and with a cap may help it stay secure in the pocket and safe.

The pandemic may mean what you bring to stand-in work changes. Consider all the changes you might see on set when you return to work, and what implications those changes may have on your work. The sooner you recognize them, the better you can adapt!

Downloading now Joy Doodle and buying a stylus will position you well to first get used to the simple app and be impressively ready for the next marking rehearsal you attend during the pandemic!

Are you standing in yet during the pandemic? What new gear are you bringing to stand-in work? Share your new gear in the comments below!