This post is part of Stand-In Central’s deep-dive series into the coronavirus pandemic as it relates to stand-in work in TV and film. For more posts in the long-running series, visit https://standincentral.com/coronavirus.

One of the things we are starting to see in stand-in work amid the SARS-CoV-2 pandemic is eccentricities among productions as they try to balance shooting while also following industry standards for health and safety.

Among the things we’ve noticed is a requirement on some productions to certify one’s temperature before the work day. This means that if you don’t have a thermometer handy, the lack of that simple and inexpensive device can mean the difference in whether you are allowed to show up to work or not, even if you are aren’t sick.

Here are some observations after recently shopping around for digital thermometers.

Contrary to what you might have learned in health classes, when you are well, your body does not always register as 98.6°F (37°C). There is a range around this temperature. WebMD reports:

So, note that the “typical” adult has these body temperatures, and those who are not yet adults may run a little warmer than adults.

Overall, this information means that if you are not right at 98.6°F when you take your temperature, and you’re a little warmer than that, that does not necessarily mean you are “sick” or you “have a fever.”

Productions may determine their own temperature at or beyond which you might be restricted from work.

WebMB reports a temperature of 100.4°F or above is regarded as “having a fever.” Productions may have the same standard, or perhaps something lower than that temperature.

This is to say that just because you have a temperature of, say, 99.0°F, does not mean you aren’t permitted to go to work. What likely will also matter is whether you are or aren’t displaying additional signs of an infection, like fatigue, muscle pain, chills, cough, digestive issues like diarrhea, loss of smell or taste, and/or shortness of breath.

Those symptoms in combination with a higher temperature may be something to consider in whether you should not go to work on a production.

Given that some productions may require you take your temperature before being admitted to work, it may be important for a stand-in to carry a digital thermometer — especially in the event the stand-in forgets to take a temperature reading before leaving for work.

Fortunately, digital thermometers are relatively inexpensive, with some under $10. They can be bought at many local drug stores as well as on the internet.

In comparing digital thermometers, we noticed the readings weren’t always consistent. So, we performed an informal test to show those differences.

Of the new thermometers, Thermometer #2, the Vicks one, I chose among those in stock mostly because of its brand name as well as its general design. 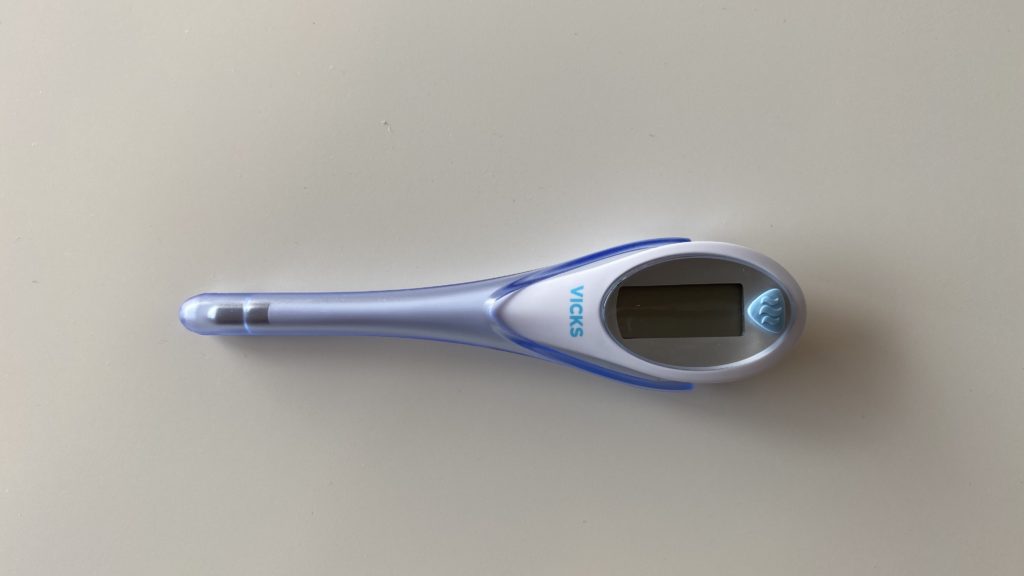 Thermometer #3, the Boncare one, I chose for the low cost and high number of positive ratings. 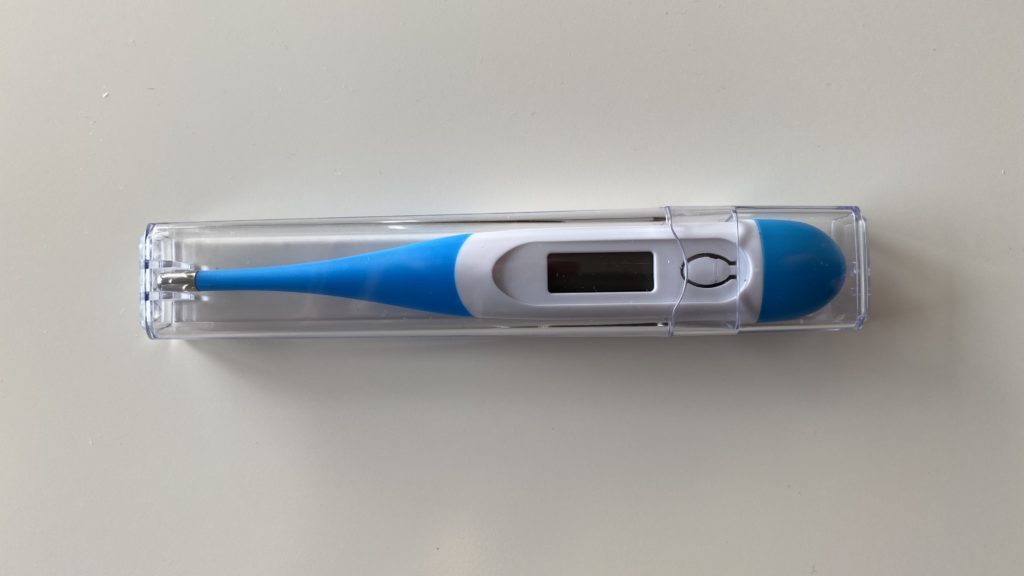 I first received Thermometer #3, which I compared against Thermometer #1, the existing Walgreens one. #3 regularly registered my body temperature as considerably warmer than #1. This frightened me, because it made me think #3 might report my temperature as having a fever when my existing thermometer would not, possibly preventing me from qualifying for work that day.

That led me to believe that, despite the positive reviews, the Boncare thermometer might be a problem. So, I sought out a third thermometer (#2) at a local drug store. In comparing it with #3, it registered around the same as #3, or perhaps a little lower.

Today I performed an informal test comparing all three thermometers. I placed all three thermometers in my mouth at the same time, then waited a number of seconds before each registered a reading.  While all of the alerts signaling the temperature was taken were not absolutely simultaneous, they did chirp within about one to two seconds of each other.

In this test, there was some measured variability in my body temperature. Here are the results of my tests. 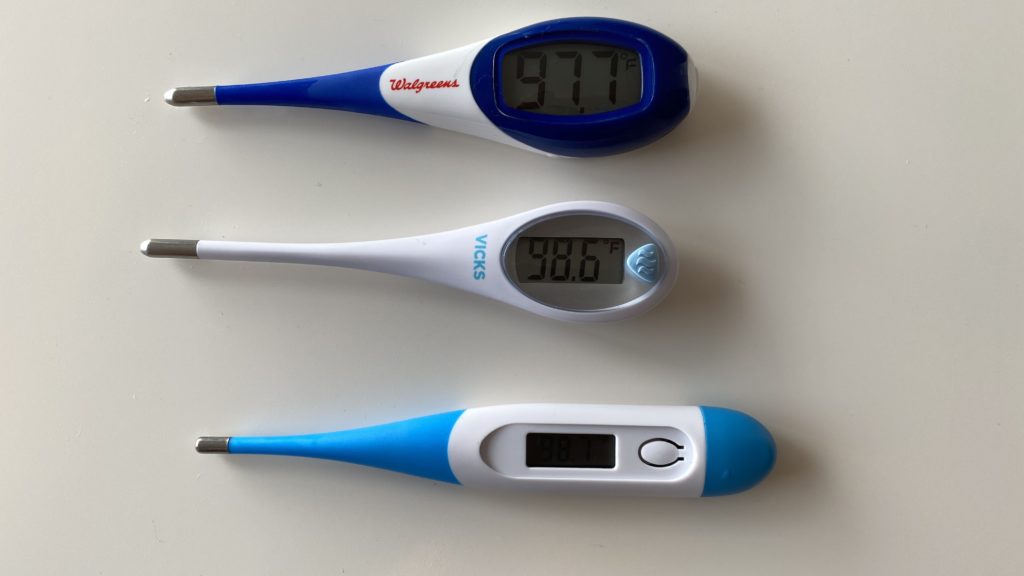 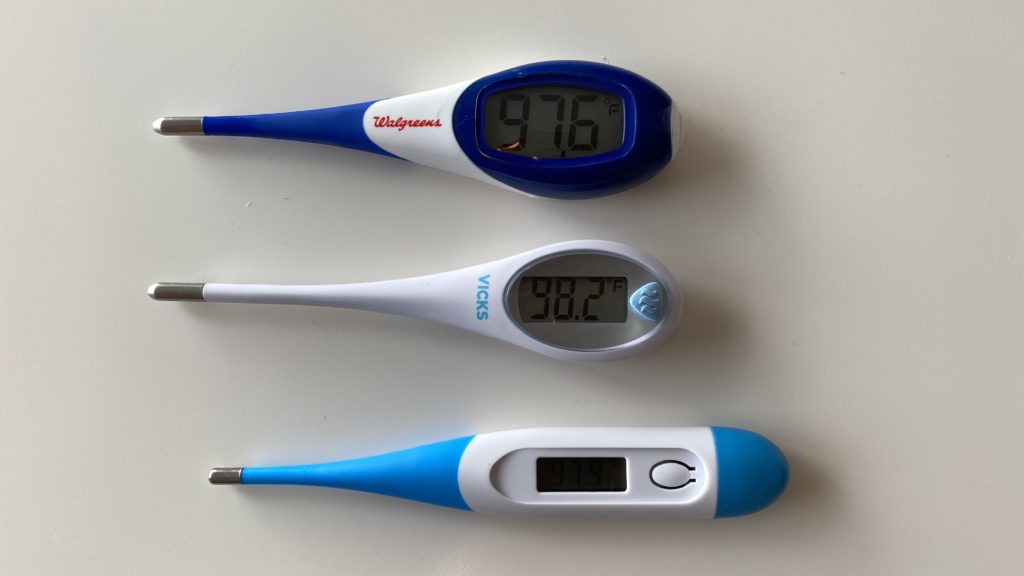 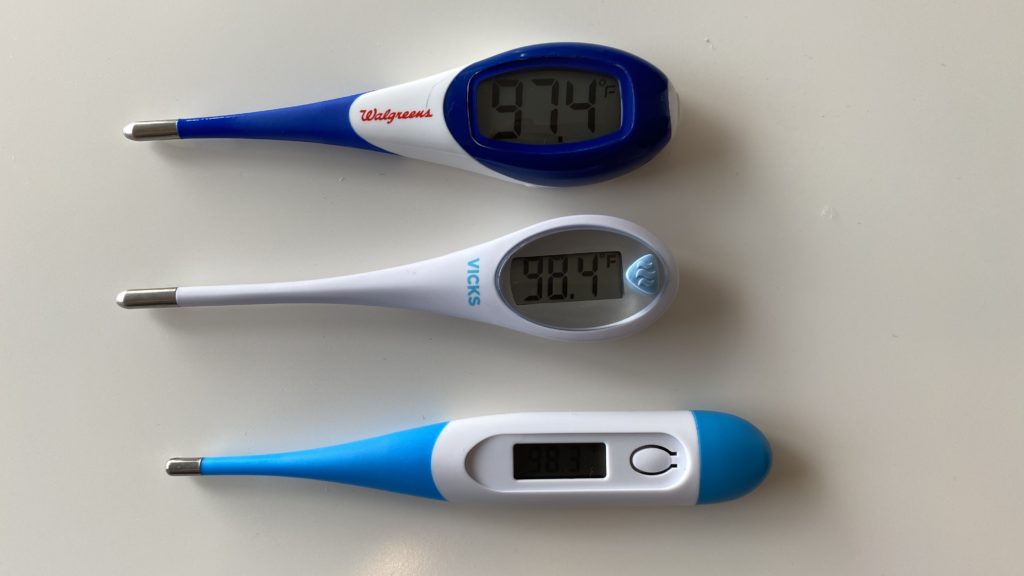 As noted in Test 1, #1 reported a whole degree cooler than #3 and almost the same amount compared to #2. Similar results were reported in Test 3.

Of course, if the Walgreens one erroneously reports lower body temperature, theoretically that is a problem when someone is running a fever but the thermometer is not registering it as such.

Between the Vicks and the Boncare, I have opted to tote with me the Vicks thermometer. The Boncare is nice with its full case: 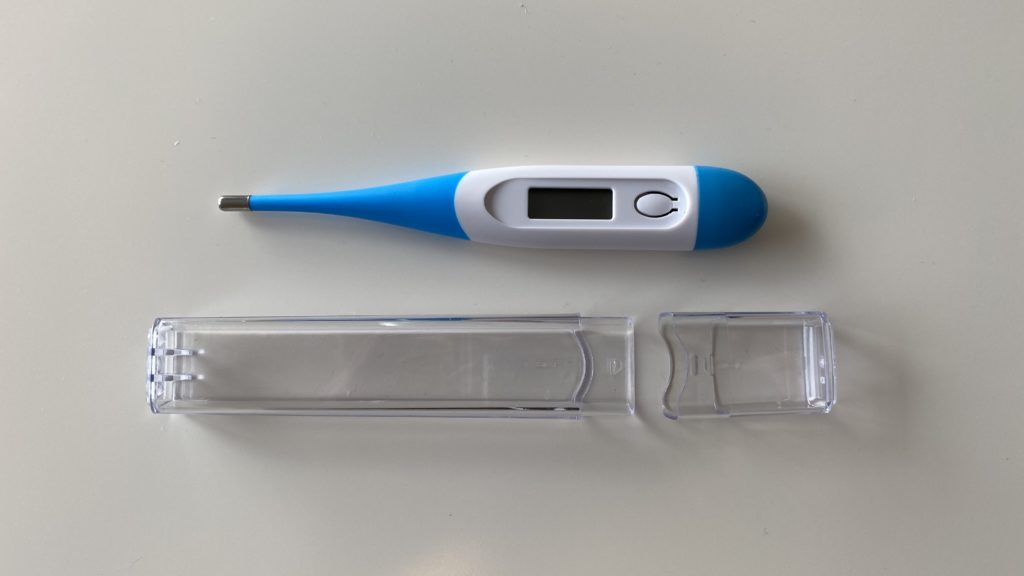 However, it has a chirp when it has registered a temperature that is so quiet, if someone is talking to you, even though it is close to your face you may not hear it. I read as much in the reviews and it was hard to believe it could make an alert so quiet as not to be heard, but that does seem to be the case. Of course, that may be advantageous when working on a set, but as temperatures will generally be taken not on set, the utility of such a quiet alert is low.

Granted, the case completely encloses the Boncare thermometer, which is a plus. However, that case may be difficult to clean as moisture builds up in it after a cleaning of the thermometer.

I opted for the Vicks thermometer because I could hear it when it registered a temperature and because its case wouldn’t trap moisture: 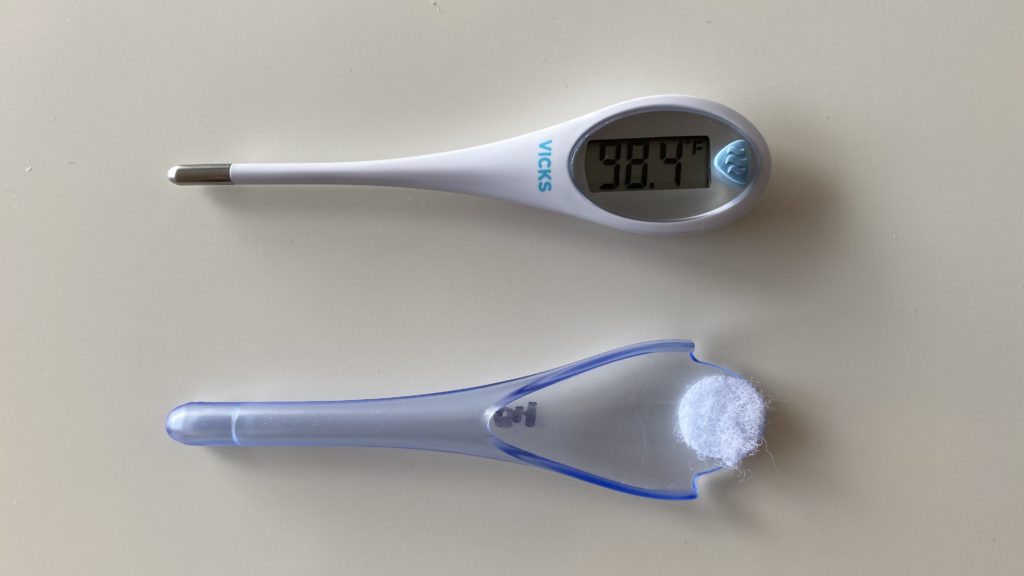 If you see a fuzzy circle, that is because the case does not lock in the thermometer when it is in its case.  The thermometer can slip out, which means the tip can be exposed. So, to lock the Vicks thermometer into place, I affixed a piece of velcro to the case and to the back of the thermometer, away from the battery cover: 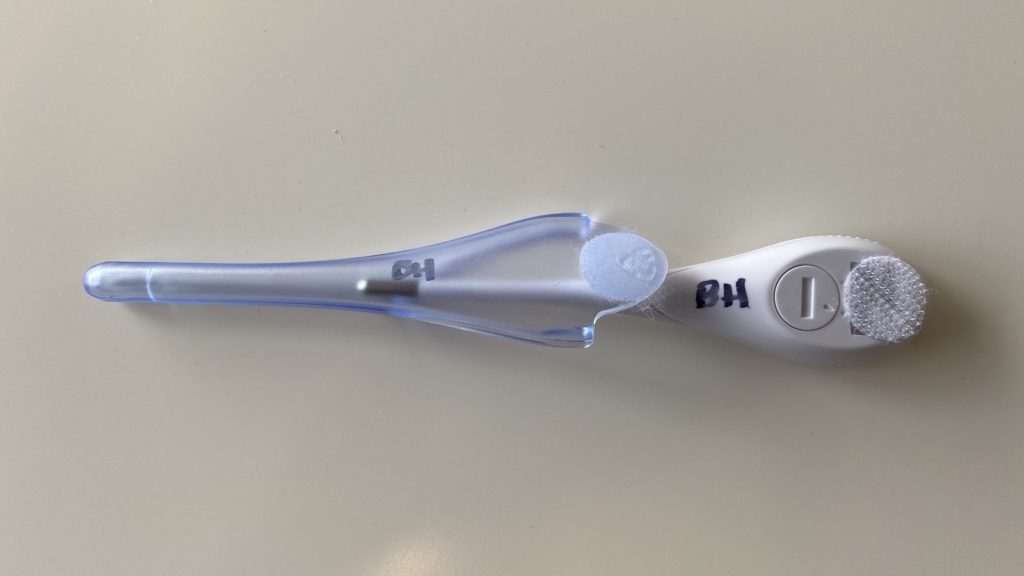 Vicks Digital Thermometer (back, with added velcro and personal identification)

So, when I slide the thermometer into its case, it stays securely in place, and is also easily removable.

I also added my initials in permanent marker on the thermometer and on the case, just in case there is a risk of getting it mixed up with someone else’s thermometer.

Of course, if you are a stand-in who is not ill, and if you’re recording a higher temperature, that is a potential problem for the stand-in because it could mean a loss of work for no valid reason.

Granted, this obviously makes sense to the stand-in to find a thermometer that registers lower temperatures on the whole. But for the production, this does not necessarily make sense.

It makes more sense for productions to take temperatures of their employees rather than to leave this to a trust system among employees, especially when there is a lack of economical incentive to stay home when feeling well but with a temperature. (In other words, if stand-ins don’t quality for pay when they are sick, they are more incentivized to go to work than to stay home, where they will not collect a paycheck.)

When purchasing a digital thermometer, you may also want to purchase additional batteries.

Many digital thermometers seem to be powered by LR41 button batteries.

Things are still fluid with respect to working as a stand-in and the coronavirus-related requirements. Being ahead of the curve will help you manage stress as you return to stand-in work. So it may be wise to make sure you have a working thermometer not only in your possession, but also handy in case you forget to take your temperature before you leave for work. And make sure you have backup batteries!

Do you have additional recommendations around thermometers for stand-ins? Post your ideas in the comments below!