In the Zoom interview, Bricine talks about stand-in work and some of his professional experiences standing in for actors, primarily for Jamie Foxx. 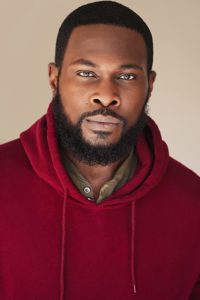 Bricine explains what a stand-in is. “Some people will consider them to be a double, whether they be a photo double, body double. Basically, their position is to assist with the lighting and the camera setup while the actual cast is — maybe they’re in hair, maybe they’re in wardrobe, maybe they’re getting prepped for the scene as far as their looks.”

Bricine continues, “Most stand-ins usually match the castmates’ skin tone, preferably their height, and build” to help with the shot the production is trying to make.

“That’s the baseline,” says Bricine, who has also had the good fortune of acting out scenes when doing stand-in work. “Every day is an audition,” the also-actor says, seeing these times as an opportunity to show “his take” on how to tell the story.

Some Demands of Stand-In Work

Bricine advises that as a stand-in, you have to be aware of your environment and pay attention.

In his experience, many stand-ins are also actors, so they treat stand-in work as if they’ve booked an acting role. They show up in similar wardrobe as their actor, do the motions their actor does, and know the sequence of shots.

A shooting day will be 10-12 hours, depending on the shooting schedule of your actor that day. Of course, if your actor is not in all scenes, you could have a shorter day, Bricine details. “Unless they may have you stand in for another individual that you actually meet the criteria for.”

The coronavirus pandemic adds a layer of intensity to stand-in work, making the safety of your self as well as the rest of the crew “imperative,” he asserts.

As Bricine explains, in the end, you have to be a likable person. While film work is serious, ultimately, everyone wants to have fun, and being likable lends to that endeavor.

How to Land Stand-In Work

Also in the interview, Bricine shares how to land work as a stand-in

He says stand-in work usually comes via casting directors who cast background actors. Being networked helps to land stand-in jobs.  What also helps is how professional you are in your career, and how well you can be trusted with the responsibility of stand-in work.

As for Bricine’s first stand-in job for Foxx (on Sleepless), there was an audition process with about five candidates with different heights and skin tones.

“I would say this was the one time in my life that I ever got a little bit ‘shook.'” With cameras set up and the director and DP in attendance, the candidates were lined up. Foxx entered, singing and greeting people. Bricine, who’s also a singer, jumped in singing, too — and so did the other stand-in candidates. “It was history from there.”

How Stand-In Work Has Helped Bricine

Bricine reveals how his experience as a stand-in has helped him be not only a better actor, but also a better person, teaching him to bring his authentic self to the screen — as well as life.

In addition to being able to study film and acting in a sort of “master class” setting, Bricine has had unusual other experiences, including doing a camera test for blood!

Have a listen to the half-hour interview with Bricine Brown on YouTube.

What questions would you ask about stand-in work? Share your questions in the comments below!