In a past entry on Stand-In Central, we posted an interview with 2013 stand-ins for the Eurovision Song Contest. Eurovision 2016 recently took place, and some of the rehearsal videos with stand-in performers were posted on YouTube.

According to EurovisionWorld.com, the Eurovision contestants’ delegations send their choreography and other instructions to the producer of the broadcast, who tries to program the cameras and lighting to meet their specifications. Local music artists act as stand-ins for the actual Eurovision contestants, who in turn perform the songs and choreography in order for the producer to rehearse the show, but also to let the contestants’ merely step in and perform without the need of complicated rehearsals.

While most of the rehearsal videos with stand-ins were eventually made private, as of this writing a handful of rehearsal videos are still available for viewing. From the videos, you see a number of behind-the-scenes elements that stand-ins in television are privy to. For example, you may see an audience absent people except for cardboard cutouts of Elvis Presley (presumably, as an artificial stand-in for audience members), along with flags to denote countries in the audience. You may also catch that one of the guitar players is not playing a guitar, but, rather, a wooden cutout of a guitar! 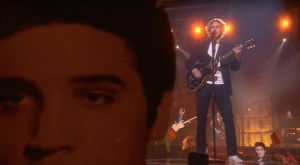 Stand-in Isac Aspberg sings to Elvis Presley audience stand-ins, with a stand-in in the background playing a wooden cutout of a guitar

It’s a lot of fun to watch these videos, as they give you a real sense of how much “glitz” goes into the show. While the stand-ins aren’t as “glitzed” as the contestants, as you can see from the videos they still are talented and able performers.

Here are some videos we’ve tracked down from 2016’s Eurovision Song Contest:

And here is another split video, notable because the contestant went on to win Eurovision 2016:

For possibly more videos, check out these articles:

Have you tracked down another stand-in rehearsal video from 2016? Post its link below!