Quite accidentally, mannequins as stand-ins have been a trending topic here on Stand-In Central of late.

Now, we’re talking about mannequins again — after having recently found the website for StandInBaby™. 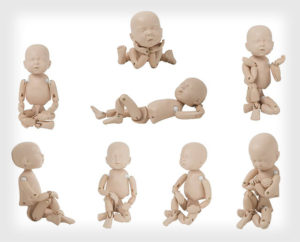 Some of the many poses that StandInBaby™ can make

Just as the name describes, StandInBaby™ is a stand-in for a baby.

Not a human stand-in for a baby, though! Instead, StandInBaby™ is a posable mannequin baby — a doll — and it’s one specifically designed to help photographers set up shots and practice taking photographs of newborn babies.

Australian co-founders Brendon and Sandra Moffatt worked with engineers in creating the mannequin, which has the same feel and weight as a newborn. The design of StandInBaby™ maps the joint position of newborns through careful study and measurement of X-ray images of babies. Made of solid silicone, the joints of StandInBaby™ have low friction to allow the mannequin to be appropriately “floppy” as a baby would be.

Here’s the Kickstarter campaign video which goes more into the construction of the doll:

The StandInBaby™ allows photographers to work with a lifelike stand-in for a baby in practicing and staging shots.

Obviously, babies are delicate, and having them off set is much better than having them try to remain still under hot, bright lights. StandInBaby™ keeps babies safe by keeping babies off set longer. StandInBaby™ also keeps sets cleaner, since, as you can imagine, dolls don’t poop, burp, or cry. An unclean set has its own safety implications for babies.

For some indication of just how demanding newborn photography could be for a model, this time-lapse video shows a photographer first learning to work with StandInBaby™ and also first working with a baby who is just five days old:

A Threat to SAG-AFTRA Stand-In Work?

While our prior posts pretty much ruled out the value of mannequins as stand-ins given that they can’t perform the actions of actors, StandInBaby™ makes us reconsider that opinion.

On-camera babies usually don’t have any directed movement they are performing when they are shot in film and television. Usually they just sit or lie in place. So, their stand-ins aren’t being asked to rehearse or recreate directed movement much as a stand-in would for a more mature actor. This means that the value of a mannequin in place of a human stand-in goes up for on-camera babies. Put another way: The value of human stand-ins goes down when it comes to on-camera babies.

On a SAG-AFTRA film or television set where actor stand-ins are union jobs, would the use of StandInBaby™ in place of a flesh-and-blood union stand-in be a threat to union work?

It’s a point to consider. While StandInBaby™ is not cheap — one baby costs $850 (U.S.) — a StandInBaby™ that is tinted to the color of the newborn who appears on camera over multiple days could be cheaper to a production in the long term than a human stand-in for the on-camera newborn.

As a point of comparison, a union stand-in as of this post makes on most television and film sets $189/8 hours. StandInBaby™ would be paid for on the fifth day of work. If the on-camera baby worked more days, then StandInBaby™ saves a production $189 each day — not to mention saves money on having additional staff or baby nurses to care for any human stand-in babies.

If prop houses had StandInBaby™, then productions could rent StandInBaby™ for cheaper than $189 a day from the outset of production. The stand-in work for newborns could be eliminated because of this useful, practical photography device.

StandInBaby™ only started shipping from Australia in November and it seems that they are currently only available in one shade, so the limits of their reach right now are apparent. But it could be a matter of time before a StandInBaby™ takes a union job. What should be done about this if you end up on a set that uses a StandInBaby™ instead of a human stand-in?

The Absurdity of It All

That said, the absurdity of the above is readily accepted.

Plenty of times on a film or television set, a prop such as a doll is rented and used in place of an on-camera baby without union cause for concern.

Plus, it sounds a bit demented to care about newborns as union workers protected under a union contract, given that they’re children, and there are gross implications that come with putting a child to work. “Should we fight for union jobs when it comes to babies who are losing out on stand-in work to mannequins?” Asking the question sounds almost nonsensical.

But the entertainment industry is one in which children are indeed employed and child labor laws are closely followed. So if children are permitted to work, should we also care when they lose out on work?

What do you think about a TV or film production using a StandInBaby™ rather than a human stand-in? Post your thoughts below!