“The Stand-In”: A New Film about Stand-Ins Starring Drew Barrymore

In this post, we discuss the 2020 film The Stand-In. As such, take this as your spoiler alert.

With the release last week of the Drew Barrymore film The Stand-In, perhaps not since 1937 has there been a movie that so prominently featured movie stand-ins as a subject of interest!

Back in 1937, the film The Stand-In featured Humphrey Bogart, and it depicted what stand-in work apparently was like back in that early age of movie production. In it, Joan Blondell portrays a stand-in, and an online trailer for the film shows her on a movie set walking on an incline treadmill as she simulates going up a mountain. (Stand-In Central reviewed the 1937 film in an earlier post.)

Fast-forward to 2020, and the job of the stand-in is prominently featured again. In Drew Barrymore’s comedy The Stand-In (released during the coronavirus pandemic on Amazon Prime), Barrymore portrays not just a stand-in but also her respective “first-team” actor. (Stand-In Central covered the making of the film back in 2019 as well as some 2019 publicity about the film.)

Here’s a trailer for the film (sorry, the thumbnail is pretty disgusting): 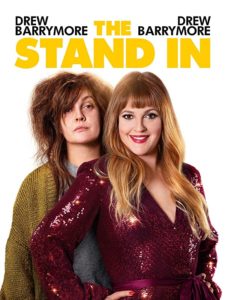 No, stand-in work is not really as portrayed in the film.

The film portrays an exaggerated version of the film world, satirizing stand-ins as pathetic, unaware of boundaries, impoverished, and desperately conniving in order to secure a mere job as a stand-in. Similarly, the film satirizes actors as weathy, rude, vain, mercurial, and elitist, sometimes toward stand-ins. These exaggerations serve to punch up the film’s desired comedic interplay between stand-ins and actors, but generally speaking, the dynamics between actors and their stand-ins in real life are not as they are portrayed in 2020’s The Stand-In.

Par for the course in terms of the relationships between actors and their respective stand-ins is probably no relationship more than simply being an acquaintance on the work day. In general, most stand-ins will have limited interactions with the actors for whom they stand in. These actors (known collectively as “first team”) aren’t always A-list celebrities or famous public figures. Many times stand-ins (known collectively as “second team”) will be standing in for day-playing actors working their first job ever, actors whom you might not recognize, guest stars, or other actors not in the limelight. While surely some stand-ins may have exhibited the ridiculous behavior as those portrayed in the film, and some actors may have as well, in reality, things on most sets are much more civil, with some actors and their stand-ins over time naturally evolving professional relationships — and occasionally deeper relationships.

Most of the interactions between stand-in and actor will be just in passing, when the stand-in is standing on a mark and the actor arrives on set. At such time, the stand-in might hear a polite thank-you from the actor, the stand-in might tell the actor that a mark has moved, or something technical of that nature. Stand-ins don’t typically talk to actors about their past acting jobs or express any sort of “fandom”; such talk is usually distracting to the serious work at hand, and as spoofed in the film, more about the professor than the actor.

Certainly, though, as portrayed in the film, some stand-ins are involved in rehearsals of scenes with other actors. At those times, stand-ins do interact with the actors. In this respect, each set is different in its use of stand-ins. In general, most sets do not rehearse with stand-ins or have stand-ins say lines in a scene. However, some sets occasionally do so with stand-ins, with still other sets regularly working with stand-ins during rehearsals. 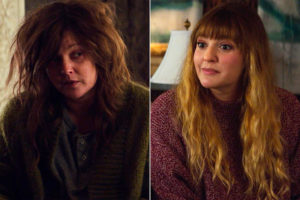 The Stand-In (2020) certainly starts out as a comedy, depicting an over-the-top and simplified world of movie production, a star actor, and the star actor’s stand-in.

But as the film moves along, and its premise evolves of a stand-in swapping places in life with her troubled actor only to take over the actor’s career, the film doesn’t seem merely as comedic as it does dark. Complementing that take, the cinematography has many scenes in dark lighting or at night, and the writing and direction has the characters in large, lonely rooms.

Barrymore portrays both the actor Candi Black, and her main stand-in of many years, Paula. (Barrymore also portrays a new stand-in toward the end of the film.) In a 2019 interview with Stephen Colbert, Barrymore called this job “the acting challenge of a lifetime.” Barrymore truly delivers incredible and rich performances in The Stand-In.

The film is remarkable in how it puts Barrymore in scenes with herself, and noteworthy for how well it pulls off this clever second premise. There are no discernible issues in pulling this off. In fact, there are a lot of impressive ways the film has Barrymore talking to Barrymore:

Of course, in “dirty overs” (shots over one actor’s shoulder, looking at the other actor), it is understandable that this film employed body doubles or photo doubles to be the shoulder, back, and hair of the character whose face is not on camera when Barrymore is talking to her other character.

It is also understandable that the film employed a stunt double(s), given that Barrymore’s star actor was a face-plant specialist in her acclaimed movies, and usually these on-screen depictions shied away from showing Barrymore’s face in the execution of these face plants.

These uses of doubles might not distract a general audience. On the whole, they were well executed with similarly sized doubles and appropriate hair styling and wigs.

One of the most painful aspects of this film, which is about a stand-in, is that it did not credit any stand-ins in the film!

Not crediting any stand-ins in a film titled The Stand-In was a real missed opportunity for the 2020 film. That fact actually read as insulting to Stand-In Central. Of all the films that needed to credit stand-ins, it appeared to be this one.

SAG-AFTRA does not seem to obligate crediting of stand-ins or background actors in their feature film or television contracts. While this might seem reasonable at least for background actors given the sheer number of them on a job, and the presumed costliness of producing credits, it does not seem as reasonable for stand-ins, who are usually a much smaller group of workers on a job.

When reading the credits for The Stand-In, you might even scratch your head why no stand-ins received credits at the end but some other workers did. One apparent answer seems to be that those workers’ unions are stronger than SAG-AFTRA, so those unions were able to obligate such crediting. Another apparent answer could be that those workers’ names ended upon a callsheet or payroll list somewhere but not the stand-ins’ names, who were probably listed anonymously or not listed at all in a more master production document.

Whether any of these answers is a correct answer is unclear. What is clear is that stand-ins rarely are credited for the work they do, including here in The Stand-In, and this fact is not because of some accident that keeps happening over and over as an inadvertent oversight. Not crediting stand-ins for the work they do is a repressive practice in the entertainment industry still alive in 2020.

A film itself is ultimately responsible for awarding credit. Some films and television series do credit their stand-ins, and with stand-ins often contributing far more days and work on a production than some other workers who do receive credit, it can be very painful to not receive credit for that work. Not receiving a stand-in credit is as if the stand-in did not make any contributions to the film, or that those contributions were not valuable enough to award credit.

Think about it this way: If you work day in and day out setting up a majority of the shots in a film with your very face and body, losing sleep and working long hours for an employer, and if you don’t receive credit for such work, but then you see others who worked just a day here and there receiving credit for their work, how does that make you feel about your contributions to that film?

If you are reading this, and if you are a producer, when awarding credit, think about the stand-ins for the actors in the cast. Ask the background casting director for the names of these stand-ins, if their names are not on a list somewhere. Don’t contribute to the repressive practice of not crediting stand-ins in productions. Do your part to memorialize stand-ins’ contributions to your production as you do for others on your job.

How to Watch The Stand-In

Despite the harsh criticism of the 2020 film The Stand-In‘s non-crediting any of its stand-ins, Stand-In Central recommends viewing the film for its exaggerated peek behind the scenes into the relationships of people working in the entertainment industry, and for its multiple textured performances by Barrymore, especially when those performances are on screen at the same time.

The Stand-In is available for viewing in limited movie theaters, which are generally closed during the current coronavirus pandemic. Fortunately, The Stand-In is also available on demand in several places like Amazon Prime.

And if you’re interested in becoming a stand-in yourself, make sure to download our ebook, The Stand-In Handbook!

Did you watch The Stand-In (2020)? Post your reactions in the comments below!