Recently, Ben Hauck was standing in and observed a marking rehearsal in which the actors engaged in a group hug.  He found its representation in marks somewhat beautiful, so he snapped this shot. 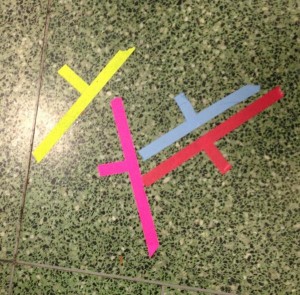 This is a shot taken by Ben Hauck of the floor after a recent marking rehearsal on a television series. The marks denote a group hug — starting with the main actor in red hugging his wife in blue, then followed by his two children in pink and yellow, who pile on.